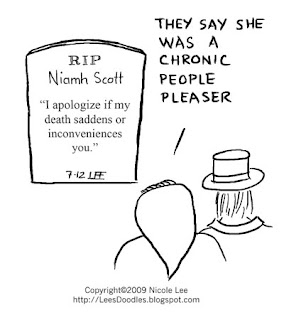 How to Deal With a Toxic Friendship

Last time, we learned how to identify toxic friendships. So, once we’ve figured out that a friend IS toxic, what can we do about it? How do we deal with a toxic friendship?

When we start feeling bad about spending time with or talking to our friends, it’s time to take a look at the relationship. Identifying the friendship as a toxic one is the first step to dealing with the problem.

Own Up to It, People Pleaser

Friends of toxic types often have something in common. According to Charles Figley, a spokesman for the American Psychological Association, “It’s a pleaser personality — you want people to like you, you want to get along, and it’s hard to say no. But you can pay the price in one way by having toxic friends.”

The fact is that, whether you can see it or not, you’ve got some responsibility in this relationship too. Maybe you’ve allowed your friend to treat you negatively or to make you feel bad about yourself because you want them to like you, or because you don’t like confrontation.

Often, people pleasers aren’t good at setting boundaries. When your friendships become toxic, it’s time to stand up for yourself and let friends know what isn’t acceptable. One anonymous reader tells of a friend who always does the “one-up” thing when she talks about problems or accomplishments.

“It happens all the time. Just the other day, I told Jessica about a promotion I received at work, and she was like ‘oh yeah, I heard I might be getting a promotion too.’ Then she went on to tell me how much better her promotion would be than mine,” says our anonymous reader. “Another time, I told her about a problem I was having with my husband, and don’t you know her problem with her boyfriend was far more serious.”

So, in our reader’s case, she might set boundaries by explaining her concerns to her friend and asking her to avoid the “one-up-manship.”

Talk to a trusted (non-toxic) friend or family member about your concerns if you can. Many times, it’s easier to figure out the problem when you’re “outside looking in”–that is, when you’re not the one with the problem, the solution to it can seem crystal clear.

If you can’t find an “objective” third party, it’s a good idea to seek outside counseling. By employing the skills of a trained therapist, not only do you get the objectivity you need, but you may also get answers or learn coping techniques you wouldn’t on your own.

You could also journal or blog about the problem. Sometimes, just putting our thoughts into words is enough to help us figure out our issues.

If All Else Fails

If you’ve tried setting boundaries and discussing the problem with your toxic friend and have not been able to resolve the issues, it may be time to consider limiting contact or ending the friendship. It’s not an easy choice and certainly shouldn’t be taken lightly, but when it comes down to it, your sanity and mental health are more important than any toxic friendship. Take care of yourself first, and then you can take care of others. People pleasers often forget this little piece of wisdom.

“There are many ways you can do this: email, phone call – you can just stop talking to the person. The best way to do this, though, is in person. Invite the person to coffee or lunch. Before meeting them think about why it is you don’t want them in your life anymore and figure out how to phrase it in non-judgmental ways. Using “I Statements” – a statement used to be assertive without putting the listener on the defensive,” says Kotler. “Let the friend know how their behavior makes you feel, ‘Bob, I feel upset when you ask me for advice and then tell me that I don’t know what I’m talking about.’ Be clear and assertive. Let the individual know that you do care about them; but, don’t feel like you can be involved in a friendship with them any longer. Give the person a chance to respond, they may not even be aware of their behavior and the idea of losing a friend might give them impetus to think about their own behavior. If the conversation turns towards the negative cut it off and walk away.”