Michelle Obama: You Do Live in a Grateful Nation

Michelle Obama’s Message to Military Families: You Do Live in a Grateful Nation (via The White House)

First Lady Michelle Obama and Dr. Jill Biden today marked the one year anniversary of the launch of Joining Forces with an event on the South Lawn of the White House, and Mrs. Obama used the occasion to renew her call of action, and challenged all Americans to keep finding new ways to show their support…

END_OF_DOCUMENT_TOKEN_TO_BE_REPLACED 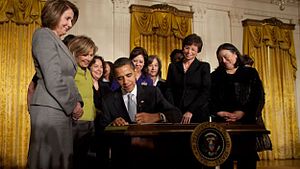 14% of our female managers in UK businesses

16% of our British female Olympic medalists

According to new research commissioned by Dove, this could become reality, as a lack of self-esteem among 11-17 year old girls prevents them from realising their full potential, with huge consequences for their personal and professional future. As Dove launches the 2012 campaign for Dove Self-Esteem Programme (DSEP), the extent of the issue has become clear.

The study reveals the shocking impact of low self-esteem, with the business world looking set to suffer. If the status quo remains, the UK could be deprived of 200,000 female business professionals and 42,000 successful female entrepreneurs by 2050.

Britain’s sporting success will be hit badly too. Self and body-esteem issues could mean an estimated two to three potential female medalists drop out of sport and as a result, never step onto the winner’s podium in future games.

Low self-esteem affects how young girls feel about their future careers with only one in three feeling confident they will have a successful career in the future. This has a huge impact on the medical and legal professions with the potential number of female doctors and lawyers reducing by 17%. That’s a shortfall of 20,000 female lawyers and around 35,000 doctors by 2050.

The shocking discontentment felt amongst young girls about their appearance is at the heart of the issue. Nearly half (45%) describe themselves as ‘average’ and ‘ordinary’ with a further 10% feeling ‘plain’, ‘unattractive’ and ‘ugly’.

As a brand that is dedicated to building positive self-esteem, Dove has developed the 2012 Campaign for Dove Self-Esteem Programme (DSEP) to make a real change to the way young girls perceive and embrace beauty.

Through the DSEP, Dove will be reaching out to young people in the UK through self-esteem workshops, which will be held in schools all over the country. Any Dove product bought between 26th March – 15th May 2012 will help to give a girl a self-esteem education. This will be delivered through a Dove donation of a minimum of £250,000 to BEAT (the UK’s leading charity for those affected by eating disorders) to deliver workshops in schools.

Ali Fisher, Dove Marketing Manager, says: “We are passionate about our social mission and want to continue to help young girls and women develop a positive relationship with their bodies. We’ve already reached over 800,000 young people in the UK as part of our Dove Self-Esteem Programme and our aim is to reach 1 million by the end of 2012. We really hope to create a step change for self-esteem with our 2012 campaign.”

Dove has also worked with some of its most accomplished supporters to highlight how low-self esteem issues, if not addressed at an early age can impact the number of successful women in the future. Successful women such as Chemmy Allcott (Olympic skier), Michelle McDowell (Civil Engineer and MBE), Jane Fallon (Author) and Karen Gill and Maxine Benson (MBE & founders of Everywoman) have been photographed by Rankin with their younger aspiring counterparts to highlight the importance of raising self-esteem among young girls and to ensure aspirations for future generations.

Karen Gill and Maxine Benson from Everywoman (an organisation that challenges and changes the mindsets of women in business) said they were saddened by the research but said it was repairable, “It should be every woman’s mission to help eradicate self-esteem issues and this is why we are so passionate about the Dove Self-Esteem Programme”.

With just over half (53%) of all girls believing that they would be happier if they were more beautiful, the reward for closing the self-esteem gap has never been so great, whilst the danger of failing to do so, equally profound.

Mum featured top of the list (37%) as the most positive role model for young girls leapfrogging well-known celebrities such as Cheryl Cole (8%), Angelina Jolie (4%) and Kate Middleton (3%)

Young girls are spending more time on make-up, beauty treatments and clothing than they are on homework

Social media portals may be hindering how confidently young girls interact with others face-to-face. A staggering 60% of girls using the internet agree that they feel more confident when interacting with people online

The effect of self-esteem was worked out by research organisation The Future Foundation which devised a model based upon our survey findings to calculate the impact low self-esteem has on 11-17 year old girls now and in later life up to 2050 when they approach their 50s.

Some 500 11-17 year old were extensively interviewed for the report “Girls Self Esteem – Potential Consequences for the Future” which investigated a range of attitudes and behaviours surrounding self-image, personal care, relationships, future planning and future aspirations. It follows up research carried out by Dove in 2010.

Dove will invest a minimum of 250k in the form of self-esteem education. During the promotional period from 26th March to 15th May 2012, if more than 20 million packs of Dove are sold it will contribute an additional £10,000 for every 1 million extra packs sold to self-esteem education. This will be delivered via one-hour workshops in schools in partnership with Beat, who will facilitate their delivery. Teachers will need to apply for teacher training and / or self-esteem workshops via the Dove website.

Dove has developed the Self-Esteem Workshop Guide for Teachers, an educational workshop for 11-14 year olds that aims to give pupils the tools to build positive self-esteem and provide a platform for group discussion on image related concerns. The self-esteem education will be delivered via a one hour workshop in schools in partnership with Beat, who will facilitate their delivery. Schools will also be offered the option of a Beat facilitator working with them to train staff in delivering self-esteem workshops through inset days that Dove can reach even more young people with self-esteem education. Teachers will need to apply for teacher training and/or self-esteem workshops via the Dove website.