The Kate Moss Theory: Stop Dressing Like a Wife and Improve Your Marriage

“[My husband] would go mental if I started dressing like a wife! He likes me when I’m a rock n roll kind of a girl.” ~Kate Moss

Look, I’m well aware of the controversy that was stirred up in the blogosphere when supermodel Kate Moss made the statement quoted above. But the woman had a point–and I don’t mean that all wives dress like crap.

I mean that many wives become a bit…complacent…after awhile. (I know because I’ve been there, too!)

Some women even justify walking around in sweats and tshirts day and night, week after week, and get offended when you suggest that they do otherwise.

Those women might as well just either stop reading now, or change their minds and prepare for a dose of tough love–because I’m about to drop some truth bombs.

So, I’ve been married a hundred years or so (ok, really, it’s closer to 15, but still). And I know that a lot of women in my position (and in fact, a lot of women in long-term relationships, in general) are likely to eventually slow down on the getting all dolled up.

“Kate Moss and I don’t have much in common, but I think she is quite right to avoid dressing ‘like a wife’,” writes Helen Kirwin Taylor. “By this, she means she’s refusing to adopt the slovenly uniform of tracksuit bottoms and shapeless tops so many women embrace when they no longer have to worry about snaring a man. I would never think about sitting down for dinner with my husband without slipping into something stylish and alluring, brushing my hair and applying lipstick.”

Helen, I am totally with you, girl.

Wives: Why You Should Still Care About Your Appearance

Obviously, if you want to be considered a hot wife, you need to consider how your appearance is perceived.

Sure, you might think it’s shallow–but my guess is that since you’re here reading this post, you know that this stuff goes a little deeper than one might realize at first glance.

I still get all dolled up on a pretty regular basis–in fact, I literally will not leave the house unless I look reasonably cute.

While my husband sometimes pretends this annoys him (because sometimes it takes me a minute to get ready), the truth is that he appreciates the fact that I care about how I look–because it makes me more attractive to him. I know this because he says so.

I also make an effort to look cute even when I’m working at home or just lounging around the house.

Why do I do it? Well, let me spell it out for you.

Because he works with tons of hot women (hello ladies!)

My husband works in a corporate office full of beautiful, stylish and intelligent women. While he would never say so, I know that if he came home to a frumped up mommy-stereotype each day, he might start noticing the ladies he works with for more than their fun personalities and ability to work well with him.

I don’t need to compete–I know he loves me and would never do anything to hurt me, regardless of what I look like–but still, I prefer to keep his attention on me, so I make sure to pay attention to my appearance.

Because it makes me feel better about myself

The truth is that the primary reason I care about how I look so much is that I simply FEEL better when I look better. And I’m not alone–just think about it. When was the last time you felt particularly beautiful? Let me guess–it probably involved a really good hair day, or one of those perfect outfit days. Yep.

So, take care of your appearance and you feel better–then you become more self-confident, friendlier, more fun and generally HOTTER. It’s true.

Because it makes my relationship stronger

I know, appearance SHOULDN’T matter, but the fact is that it does. You see, it’s really easy to get so comfortable with each other that you forget to care what your spouse thinks about how you look. And maybe he forgets too–but most likely, he’s well aware of it.

Even if he’s one of those awesome guys who totally loves you and would never even consider straying, he still notices–and he will appreciate it if you make an effort to be attractive for him.

So, in addition to your self-confidence and your actual more attractive appearance, your better attitude will shine through, and that, my friends? That makes you super hot–and I promise you, he WILL notice.

While there is no one look that can be called hot, making an effort with your appearance on a daily basis can literally improve the quality of your life–and of your marriage.

What do you think? Do you make an effort to look HOT for your husband? Why or why not? What tips would you offer other wives? Share your thoughts, experiences and ideas in the comments section, below.

How I Knew He Was ‘the One’: Women Speak

How did you know that your husband was the One? How’d you know you wanted to get married?

An informal survey of women between the ages of 24 and 65 produced some very interesting stories. Here are a few of the ones that struck a cord with me.

How I Knew I Wanted to Marry Him: Women Speak Out

“The moment I saw Mark from across the room I knew I wanted to marry him. I even told one of my best friends at the time that I was going to marry him some day. That was on December 12th, 1994. I was 17 and he was 23. Four kids and over 16 years of marriage later, we still say I love you at least 10 or more times a day, even if we are arguing.” ~Amanda

“I told my mom the first time I saw Robert that I would marry him. We had a great friendship during our journalism workshop and that made things even better when we started dating. I just always felt a strong connection to him and I think being friends somehow gets us through the rough spots but we’re 10+ years together and almost 3 years married and looking forward to the 5, 10, 15, 20+ year marks.” ~Aja

“For me, it was that he made me feel like my life was complete when i was with him. I knew he was someone I could grow old with. I feel so blessed any lucky to have him and he still gives me butterflies. This is my second marriage and i finally got it right. He makes me happy.” ~Shelly

“I knew I wanted to marry my husband when I caught him playing Barbies with my 2 year old daughter. At least he was playing with the Ken doll.” ~Lisa

“We went on a road trip together that took us to about eight different states. At one point, we had to drive through West Virginia for hours and hours and hours in the pouring rain. We didn’t get to our hotel until after midnight. We didn’t argue once — that’s how I knew we were meant to be together.” ~Leigh

“I felt like I could breathe when I was with Marco. I didn’t have to “be” anything. I could just be. He was so laid back and cool with everything and not wound up. He was my polar opposite, my balance. Being with him made any other relationship feel like it had been in another life almost. It’s hard to describe and it’s something I’d never felt before meeting him.” ~Sarah

Your Turn: How’d you know he or she was “the ONE” for you? Share your thoughts, feelings and experiences in the comments section, below.

Ladies: What makes you hot? 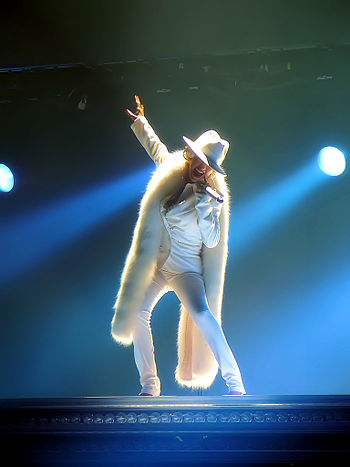 As a woman, what do you think are the qualities that cause you and/or other women to be considered “hot?” An informal survey of women between the ages of 18 and 65 produced varied answers. Here are some of the most interesting.

“A womans hotness should be defined in two ways…
A man, curves large lips and hair
A woman EVERYTHING ELSE.” ~Julie Ann

“According to my 6 yr old the thingamajiggys on their chest that boys really don’t have. Hubby agrees.” ~Christina

“I think a woman’s ankles are beautiful tanned, accented with a small charm bracelet and accenting the cuteness of the strappy sandals her feet are caressed by.” ~Julie

“A genuine smile because happiness radiates from the inside out.” ~Jackie

“Confidence is the key!” ~Angelia

“Leaving something to the imagination. Baring it all is not always a hot thing. My opinion.” ~Karen

“My husband says a woman who has a little independence and strong ambitions.” ~Aimee

“Pure confidence. You can be big and tall and as long as u have confidence and carry yourself well, you will become sexy.” ~Renae

Your Turn: What do you think makes a woman “hot?” Share your thoughts and experiences in the comments section, below!