Melinda Gates: Standing Up for What She Believes in the Face of Extreme Criticism 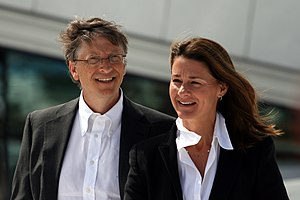 Before today, I didn’t think too much about Melinda Gates. But today, I learned that Gates has decided to stand up for her beliefs and use her considerable influence help women all over the world, despite the growing criticism against her from her fellow Catholics.

I grew up with a lot of religious people, including many Catholics, and I  know that this is not something to be taken lightly. It takes an incredibly strong person to go against the grain, especially so publicly. I am so impressed that Melinda Gates prioritized her concern for innocent people and understanding of the truth of the situation to overcome any fears she might have felt when it was time to answer to her critics.

If you didn’t know, she’s the wife of Microsoft founder Bill Gates, and together, the couple runs the Bill & Melinda Gates Foundation.

The foundation is organized into three primary, focus-specific program areas, including Global Development, Global Health and the United States Program. According to the foundation’s website, it works with a range of partners to help try to solve large-scale problems.

Specifically, the Gates Foundation is targeting extreme poverty and poor health in developing countries and the failures of America’s education system.

But this week, bloggers everywhere are engaged in a written war over Mrs. Gates’ position on birth control.

As Catholics everywhere are asked to support a bill that would not force religious organizations to cover birth control for its employees, Gates stood up and said she believes that every woman should have access to birth control.

“I didn’t fully appreciate how much contraceptives changed my life because I never lacked access to them,” she said in an interview with CNN, pointing out that hundreds of millions of women and girls in sub-Saharan Africa and South Asia don’t have access to contraceptives. “The lack of birth control is more than a minor annoyance. It can be a significant barrier to a better life.”

She went on to say that when she learned what women in poor countries faced, she wondered what her own life would have been like if she hadn’t been allowed to use birth control.

Gates says she’s passionate about family planning because she’s learned that women in  developing countries are demanding access to contraceptives; they want the power to determine their futures.

“Simply giving women the means to space the births of their children three years apart would decrease deaths of children 4 and younger by 25%,” she told CNN.

I applaud Gates for standing up for these women and giving them a voice. But even more, I applaud her for doing so in the face of religious discrimination.

The Controversy Rages On

Gates is openly Catholic. And Catholics aren’t supposed to believe in birth control. Heck, I even had to have my third baby at an alternate hospital because I wanted to have a tubal ligation after the birth–and my local Catholic hospital wouldn’t allow my doctor to perform the procedure there.

And so, as you might expect, Gates was attacked for her position.

One die-hard Catholic blogger even went so far as to essentially call Gates a racist.

“Make no mistake: the artful concern expressed by evil women like Melinda Gates about poor third-world mothers and their trials is nothing but a cloak for the push to lower the African birth rate (and that of similar places in the world) until it drops well below replacement level,” wrote the blogger. “Because the only thing more horrifying to the rabid anti-population types like Gates than a world full of people is a world full of brown people.

But Bryan Cones, a blogger at U.S. Catholic, says Gates’ argument is a winning one.

“Even if you agree with the church that artificial means of birth control are immoral, it is indisputable that women in poor countries, along with their children, have better outcomes when they bear fewer children,” Cones writes. “To be effective, natural family planning requires charts, thermometers, and agreement by the couple to refrain from intercourse for as many as 10 days during a woman’s cycle. It is, frankly, a luxury for relatively wealthy people.”

Cones goes on to say that poor women deserve the same opportunities as everyone else, and that whatever moral danger there is in artificial birth control is far outweighed by the positives that it could bring forth for poor women. Ultimately, Cones concludes that this is a moral risk worth taking.

Gates is promoting that program, which will raise billions of dollars to provide birth control for millions of women around the world, at the London Family Summit on Wednesday.

Truth be told, it seems that most Catholics don’t think birth control is such a big deal—but those who do seem to have pretty loud voices. Lucky for women everywhere, so does Melinda Gates.

Where do you stand on this issue? Should birth control be a right afforded to all women? Tell me what you think in the comments section, below.