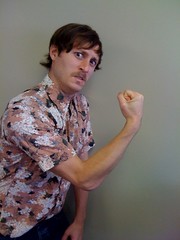 Whether it’s right or wrong, research shows that people generally form their “first impression” of you within a matter of a seconds of meeting you for the first time.

According to the Association for Psychological Science‘s Eric Wargo, that includes opinions about your personality, your character and more.

“Forget whatever figure you may have heard,” Wargo writes. “Not to intimidate you, if you happen to be preparing for a job or grad school interview, or a blind date, but new research shows that you may need to have your act together in the blink of an eye.”

Wargo points out a series of experiments done by two Princeton psychologists, who found that it only takes a tenth of a second to form an impression of a stranger’s face–and perhaps more surprisingly, getting to know that person better doesn’t often change those first impressions. On the plus side, longer exposures were found to increase confidence in a person’s judgments.

So why do first impressions matter?

Human nature isn’t always kind. The way we see a person’s facial appearance has a big effect on how we treat that person–and the way people see our faces directly affects how we get treated.

The fact is that people who are considered attractive tend to do better in nearly every aspect of their lives. Just look to the legal system for confirmation, Wargo says.

“People with ‘mature’ faces receive more severe judicial outcomes than ‘baby-faced’ people,” he writes. “And having a face that looks competent (as opposed to trustworthy or likeable) may matter a lot in whether a person gets elected to public office.”

We’ve all had our off-days (or weeks or months) and I’m no exception. Personally, I gained a lot of weight during pregnancy and struggled to take it off–heck, I’m still working on those last few pounds.

But when my scale tipped out at my highest weight ever, I was very aware of the fact that I was being treated differently because of my appearance. People made assumptions about me that weren’t true–that I was not intelligent, that I was lazy, that I was not competent. It was very hurtful and frustrating, for sure, but definitely motivation to change and get back to being my fabulous self.

So, aside from being YOUR fabulous self, how can you make a great first impression every time? Just learn how to accentuate your assets and work what you’ve got.

Answer these questions to help you plan a positive and memorable first impression:

One thing is for sure: all your life, you’ll have opportunities to meet new people and make an impression. Plan now to make the most of your assets. You just might be unforgettable.

What are your best tips for making a great first impression? Share your thoughts in the comments section, below!

The Power of Suggestion: What We Expect Influences Our Behavior, for Better or Worse

A lucky rabbit foot. A glass of wine. A pill. What do these things all have in common? Their effects – whether we do well on a test, whether we mingle at the cocktail party, whether we feel better – all depend on the power of suggestion.

Psychological scientists Maryanne Garry and Robert Michael of Victoria University of Wellington, along with Irving Kirsch of Harvard Medical School and Plymouth University, recently delved into the phenomenon of suggestion, exploring the intriguing relationship between suggestion, cognition, and behavior. The article is published in the June issue of Current Directions in Psychological Science, a journal of the Association for Psychological Science.

Across many studies, research has shown that deliberate suggestion can influence how people perform on learning and memory tasks, which products they prefer, and how they respond to supplements and medicines, which accounts for the well-known placebo effect.

But what can explain the powerful and pervasive effect that suggestion has in our lives? The answer lies in our ‘response expectancies,’ or the ways in which we anticipate our responses in various situations. These expectancies set us up for automatic responses that actively influence how we get to the outcome we expect. Once we anticipate a specific outcome will occur, our subsequent thoughts and behaviors will actually help to bring that outcome to fruition.

So, if a normally shy person expects that a glass of wine or two will help him loosen up at a cocktail party, he will probably feel less inhibited, approach more people, and get involved in more conversations over the course of the party. Even though he may give credit to the wine, it is clear that his expectations of how the wine would make him feel played a major role.

But it’s not just deliberate suggestion that influences our thoughts and behaviors – suggestions that are not deliberate can have the very same effects. As the authors point out, “simply observing people or otherwise making them feel special can be suggestive,” a phenomenon termed the Hawthorne effect. As a result, people might work harder, or stick to a task for longer. And this case is more worrying, says Garry, “because although we might then give credit to some new drug or treatment, we don’t realize that we are the ones who are actually wielding the influence.”

It is for precisely this reason that the issue of unintentional suggestion has important implications for academic researchers. “In the scientific community, we need to be aware of – and control for – the suggestions we communicate to subjects,” says Garry. The authors note that some recent failures to replicate previous research findings may ultimately be explained by such unintentional suggestion. “Recent research suggests that some of psychological science’s most intriguing findings may be driven, at least in part, by suggestion and expectancies,” Garry observes. “For example, a scientist who knows what the hypothesis of an experiment is might unwittingly lead subjects to produce the hypothesized effect—for reasons that have nothing to do with the experiment itself.”

And the unintended effects of suggestion aren’t just restricted to the laboratory – they cut across many real world domains, including the fields of medicine, education, and criminal justice. For example, converging evidence on eyewitness identification procedures demonstrates that the rate of false identifications is significantly higher when lineups are conducted by people who know who the suspect is than when the lineups are conducted by people who don’t.

While research has provided clear evidence for the phenomenon of suggestion, there is still much more to learn about the underlying relationship between suggestion, cognition, and behavior. As the authors point out, researchers still don’t know where the boundaries and limitations of these effects lie. “And, if a ‘real’ treatment and a ‘suggestion’ lead to a similar outcome, what differentiates between the two?” says Garry. Understanding these issues has important real world implications. “If we can harness the power of suggestion, we can improve people’s lives.”

###
Provided by the Association for Psychological Science