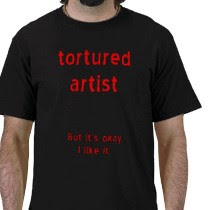 When I was a teenager, I thought that being a “real” writer/artist type person meant that I had to be tormented, broken somehow. It seemed to me that most of my literary heroes (Plath, Hemingway, etc.) were tortured souls–people who were somehow unfit for this society–and through no fault of their own. As far as I could tell, these genius writers were simply too smart, too sensitive, too deep for the social orders to which they were subjected.

And, as life piled up on me, I was afflicted too. As I focused on being a “tortured artist,” I attracted all sorts of dysfunctional situations into my life. No matter what I did, it seemed like I could never get ahead. I filled notebooks with the story of my self-induced pathetic life and drew more and more negativity into my world.

Of course, at that time, it never occurred to me that I was bringing it all on myself. Nope, I thought, I just can’t handle this world and this world can’t handle me. I really thought that somehow I was so different than every other person walking down the street. No one could possibly understand ME, I thought.

And then, one day, I realized the truth. I’ll be honest–it took a few years. But one day I woke up and recognized that, in my quest to become what I thought was a “real” writer/artist type person–I was basically begging for negativity. Every time I turned around, I EXPECTED the other shoe to fall–and it always did. 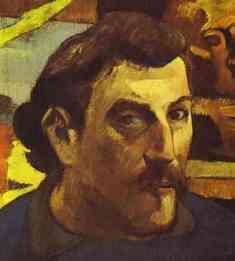 Post-impressionist painter Paul Gauguin once lamented, “I am a great artist and I know it. The reason I am great is because of all the suffering I have done.”

As for me, I learned the hard way that life doesn’t have to suck. These days, I expect only the best. It works for me. I have learned something since my “tortured artist” days–you don’t have to be miserable to be creative–and quite honestly, misery and success aren’t actually friends. The fact is, while misery loves company, it has no interest in success.

Many creative souls have this misconception–that they must be miserable to be effectively inspired. And, hey, if that works for ya, go for it. But here’s what I know: being miserable sucks. Being happy, on the other hand, feels great. And, I don’t know about you, but I’ll take feelings of elation over feelings of dread any day.

But really, my tortured artist friends…how is that working for you? Does being unhappy really serve a purpose in your endeavors, or do you just think you must be tortured to be legit?

Personally, I think The Collective Inkwell’s Sean Platt had it right.

“I never understood the image of the pained and tortured writer, tearing clumps from their hairline as they face the impossible foe of filling the page, pulling sentences from their minds like ore from the deepest corners of a mineshaft,” he wrote.”Creativity is a garden that only grows with nutrients in the soil and sunlight in the sky. Ideas are seeds, eager to spread and germinate deep within a fertile mind. The best method to finding your best writer is to practice your craft. Complaints not included.”

So often, we feel that we need to fit into a certain mold–ironically, of course, considering that most tortured artists consider themselves outsiders–when in reality, they’re just conforming to the expectations they think society has for them.

Of course, by now you recognize that today’s post isn’t just for my fellow writers. Nope, it’s for each and every one of you. From the harried mom who never gets a minute to herself to the overworked executive who isn’t even sure what his wife looks like anymore, and all the way to the rebellious teenager who is sure his parents are dumb as a box of rocks–it’s all the same. In our efforts to exist as individuals, most of us have, at one time or another, fallen into some society-driven pattern or another. Yeah, these are stereotypes–but think on it a minute. Don’t you know someone who falls in to at least one of those categories?

Let me get to the bottom line here.

I’ve said it before, and I’m going to say it again.  YOU GET WHAT YOU EXPECT. As you think, so you become. Your perception becomes your reality. And hey, you don’t have to believe little old me–just remember what author William James said: “The greatest discovery of my generation is that human beings can alter their lives by altering their attitudes of mind.”

Today, I ask you to challenge any stereotypes that society places on you. Change your mind. Begin to see (and be) the person you want to be, the life you want to have–and then believe it’s all yours. Watch as your life changes along with your mind–and be amazed. Be happy, my friends. It really is all in your perception.

What do you think?