Dirty Dozen: 12 Most Annoying Things Men Do in Relationships

Men, we love you. We really do. But seriously, you’re not the only ones who have a few complaints about the opposite sex. In response to the recent AskMen.com article entitled Top 10: Annoying Things Women Do, I present to you the top 12 most annoying things men do. I tried to stick with 10, but I ended up with this dirty dozen instead.

I want to hear what you think, too! If you have thoughts on this or items you think should be added, I’d love it. Leave me a comment, below, with your thoughts. I promise to respond personally.

Now, on with the show!

1. Refuse to Commit to Stuff (to Anything, Ever)

Whether you’re on a first date or you’ve been married 25 years, men seem to have issues with commitment. We all know how some guys refuse to commit to even being in a relationship, but even those who do sometimes can’t commit to the most basic things. Example: often times I try to get my husband to commit to a particular activity at a particular time, but he prefers to keep his options open. Like when I ask him to watch an episode of Breaking Bad with me after dinner (yeah, we’re re-watching it because we loved it that much) and he says he’s not sure – maybe he’d rather play a video game. Grr.

2. Have Double Standards (But Pretend They Don’t)

You know what I’m talking about. They will insist on some rule in the relationship or home (don’t date other dudes, don’t eat in the living room, etc.), but they will break it and expect you to be totally fine with that.

Like they expect you to listen to their stories from top to bottom (and to be prepared for a pop quiz at the end), but they can’t offer the same courtesy. Sure, they’ll fake it a little while you’re dating, but once they’ve got you (i.e. you’re married or in a long-term relationship), you’ll see very quickly that they forget how to listen.

It’s not their fault, exactly, it’s kind of how they’re wired. Best practices to be heard, women: say only as much as you have to say and skip specific details unless he asks.

3. Think It’s That Time of the Month (Anytime We Get Emotional)

Okay, here’s the deal. Women, like men, are hormonally charged at different levels throughout the month. And women are, by nature, more emotional than men (in general—but there are plenty of examples of the opposite on both sides).

But to assume that she’s on her period every time a woman gets pissed, upset or otherwise unpleasant is just asking for a beatdown. Proverbially, most of the time, but still. Stop that.

4. Talk to the Boobs (Even When the Face is Listening)

This one is annoying, but it can also be amusing if you want to look at it that way. See, men are biologically programmed to be interested in and to “check out”  woman’s reproductive potential, whether or not they actually intend to act on the findings. Generally, they don’t (especially when they’re happily married) but they still can’t stop themselves from talking to your boobs (which are, obviously, one of the most prominent signs that you are a fertile female). It’s funny, right?

But men, next time you’re talking to a woman, know that we watch your eyes and we expect a little eye contact. Save the globe-gazing for sneak glances when we look away, okay?

We know that everybody farts and burps, but we don’t want to smell it or hear it or think about it—and especially not in public.

And, seriously, snot rockets are never okay, buddy, so just stop. Would you like it if we girls walked around all day spitting and blowing various bodily fluids and gasses from all of our orifices?

How would you like it if we crop dusted you at the office? You’d be grossed out too. Stop it, man, just stop it.

I don’t know how you guys walk around with all that external genitalia, but I feel for you. Still, that doesn’t give you permission to openly reach in and jangle around your business while we’re in public . I promise they won’t go anywhere.

Speaking of junk, the same goes for scratching it when people are looking. Be discreet, for crap’s sake. Imagine if women walked around digging in their treasure troves. (Okay, stop imagining that – I forgot you guys’ minds spend a lot of time in the gutter!)

7. Selectively Listen (And Only Hear Food, Sex and “Me”)

We might tell you that we need you to take out the trash and walk the dog, but all you heard was “I’m going out for a couple hours so it’s time for you to veg out in front of the PlayStation and play your new hockey game.”

Is this because you don’t want to do it? Because you aren’t interested in what we have to say? Women are definitely more detailed and expressive in their conversations than men, but you can’t listen at all?

A tip for my fellow ladies: men are significantly more likely to listen to anything you have to say if you can associate it with food, sex or anything that is directly related to them and their interests. So next time you need him to get something done, maybe you can throw some zingers in there. Wink wink!

I don’t know many men who aren’t giant babies when they’re sick. It’s just part of who they are, I think, and maybe it’s most often men whose mommies took extra special care of them when they were sick as kids.

Here’s the deal, boys. We don’t mind taking care of you when you’re sick, but this whole “poor me” whiny baby thing? SOOOO not attractive. Quit it. Just be sweet to us, thank us for all we do for you. And then shut your mouth, close your eyes and take a damn nap while we go do something else. We are busy!

9. Eye-Screw Other People (Even When They Don’t Mean It)

So listen up, men. Women think too much, care too much and often try too hard to be perfect. Maybe that’s part of why we are well-aware that you look at other women. We also know that it’s part of your human maleness and that you can’t help it. But our defensiveness of you and our relationship when it comes to other women is part of our human femaleness—it’s built into our DNA.

Before you get your hopes up and think we’ve evolved too much, know that women aren’t ever going to be totally fine with you ogling or being into other women. But good news: there are some things that you could do to take the sting out of it.

For example, don’t let us see it, and if we catch you, do or say something to make us feel more secure. (Hold our hand, put your arm around us—tell us how much prettier we are. Whatever—just read the room!)

Even though most married guys don’t send unsolicited dick pics, some of them do. And plenty of idiot single guys do. As a married woman, I have received a surprising amount of dick pics from near-strangers. And I’m married and nearly 40. I cannot imagine what my single counterparts are going through.

Men—don’t send us a picture of your penis or any other naked body part unless we  ask you to do so. And if you really feel motivated to send one but we haven’t asked? Please ask first. PLEASE.

We aren’t as visually stimulated as you are, and honestly, some women even find penises unattractive. (SOME women.)

11. Sticking Us in Those “Girl” Boxes (Because We’re Pretty, Sexy or Otherwise Appealing to You)

Dude, just because I’m a blonde and I like to dress it up doesn’t mean I am stupid or less than you. I can’t believe I have to keep saying this – it’s 2015 for crap’s sake. But let me remind you one more time: we do not fit into neat little stereotyped boxes. We’re like onions, but less stinky.

Just because your girlfriend or wife embraces her femininity doesn’t mean she’s not smart. Or, if she’s a mechanic and comes home dirty every day? She can still be sexy and femininine.

Just because a woman is a stay-at-home or work-at-home mom doesn’t mean she sits around and eats bon-bons all day. I’d like to see you try do do what they do all day and still have time to take a leisurely poop. Just kidding. Well, sorta.

My point? Just stop putting us in those boxes, guys. We are just as multifaceted as you, if not more so. Give us credit where it’s due.

It doesn’t matter if we’ve painted our living room or completely changed our hair, if men not in the right frame of mind, they just won’t notice. This is again part of their human maleness, but it still makes us feel crazy.

Ladies, try pointing out the things they need to notice. Yeah, it might be annoying, but at least you’ll get a little validation out of the deal. And men? Don’t forget to notice stuff, okay?

Did you like this post? Click here to stay up-to-date by signing up for my free newsletter. I promise not to spam you , and I’ll never give or sell your email address to anyone. 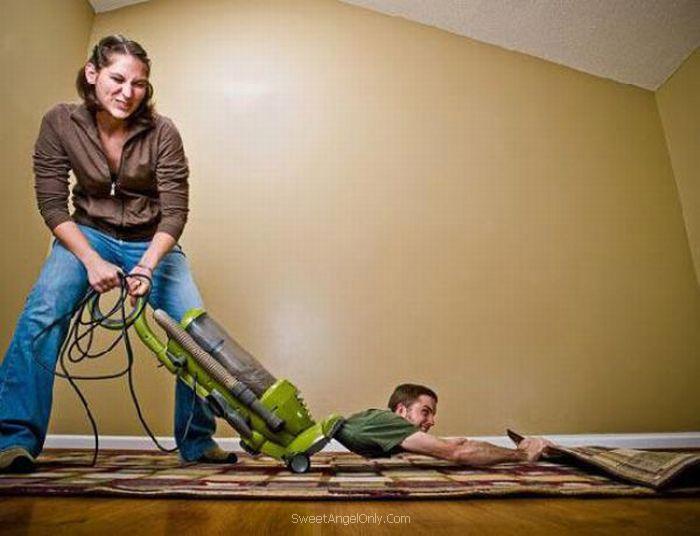 Your Daily Smile: Men and Women

“I got a cookbook once,” said one, “but I could never do anything with it.”

“Too much fancy work in it, eh?” asked the other.

“You said it. Every one of the recipes began the sameway – ‘Take a clean dish.”

Men are like weather.
Nothing can be done to change either one of them.

A man was reading the newspaper during breakfast and said to his wife, “Look at this. Another beautiful actress is going to marry a baseball player who’s a total dope!

I’ll never understand why the biggest jerks get the hottest wives.”

His wife said, “Thank you.”

Got a funny (clean) joke, story or pic to share? Add it to the comments section below, or email me at [email protected]  to have it published in the Your Daily Smile column!