Last Minute Gift Ideas for Mother’s Day: Inexpensive but Thoughtful Gifts You Can Get (Without Leaving the House!)

If you’re anything like me, you like to do things at the last minute – and if you’re buying a gift for your mom this year, this may be one of those things you sorta…waited to do. That’s why I figured I’d throw together this quick list of last-minute gift ideas for Mother’s day – these are gifts you can order from home and receive in time for Sunday’s Mother’s day celebrations! Or, have them shipped if you can’t or won’t see your mother.

In no particular order, here are some of my favorites!

The Gift That Keeps on Giving!

– or just get one of these awesome subscription box services for her!

Does your mom love:

Still not sure? Why not just get her a good old Amazon eGift Card

? That’ll ensure that she can get whatever she wants or needs! If she loves it, you can always get her a Amazon.com Gift Card Balance Reload

next year. Feel too impersonal? Get her the Amazon.com Gift Card in a Floral Box for Mother’s Day (Classic White Card Design)

If she isn’t sure what to get with her gift card, maybe she wants to try some of these before she buys. So remind her she can also:

Your turn: What are you getting YOUR mom for mother’s day? Tell me in the comments!

Narcissists in general, regardless of sex, will continuously manipulate to get what they want. They usually show certain symptoms pretty universally – grandiosity, an inflated sense of self-importance and they tend to feel “superior” to others around them, whether they say that out loud or not.

Since their feelings of superiority are typically “bloated” versions of the truth, most narcs – male and female – spend a lot of time focusing on reinforcing their fragile self-perceptions – and that leads to their various forms of manipulation.

I read about a study awhile back that offered a few key findings about the major differences between male and female narcs, and in my own experience, a lot of the findings were true.

So, to begin with, men will often use a lot of force, directly or indirectly, to sort of “assert” themselves and their superiority over others, while women who are narcissists will take a different form – usually a bit more of narcissistic injury or even seduction.

Some of the interesting findings included these key differences.

This is defined as “a course of action to protect or enhance one’s self-evaluation in the fae of an evaluation threat.”

In layman’s terms, that means that male narcs try to appear confident, but if they fear they will fail, they will “self-handicap” to avoid having to perform at all – they use this tactic to avoid feeling or seeming incompetent.

According to the study authors, this kind of manipulation is directly connected to a “failure in empathic responding by the mother, resulting in both males and females developing a deficient internalized structure of self. Strategies developed to compensate for it may take on different forms in the males and female.”

For example, the authors added, “mothers may be responding to boys as a significant other figure (e.g. husband), but to girls as an extension of self. As a result, each gender uses different psychological resources to cope with the same deficient internalized structure of self.”

Also from the study:

“Male narcissists tend to make excessive efforts to assert their superiority over others. This behavior, to explicitly dominate and otherwise behave in line with their self-interests, is socially acceptable for males in much of western society. However, such behavior by females would reap fewer benefits. They endeavor to achieve their narcissistic goals through more subtle, indirect, and affiliative means that conform with expectations of their sex role and the pressure of different social constraints.”

Other points of note:

While this list isn’t all-encompassing, it does offer you a general overview of both male and female narcissists and their various differences in behaviors.

What do you think? Have your experiences been similar? What would you add? Share your thoughts and experiences in the comments section, below.

My Two Cents: What If Mommies Ran Away From Home?

“The natural state of motherhood is unselfishness. When you become a mother, you are no longer the center of your own universe. You relinquish that position to your children.” ~Jessica Lange Being a mom is a hard job. And sometimes, you’ve been unselfish for TOO long. You might even feel like just running away.

What would happen if mommies decided to run away from home?

I mean, what if you open the door and run and don’t look back?

Of course this is something I (and most moms) would never do, but sometimes it feels like to have that option would be great.

Moms have to be strong to put up with all the crap we take from our kids, mates and the world. 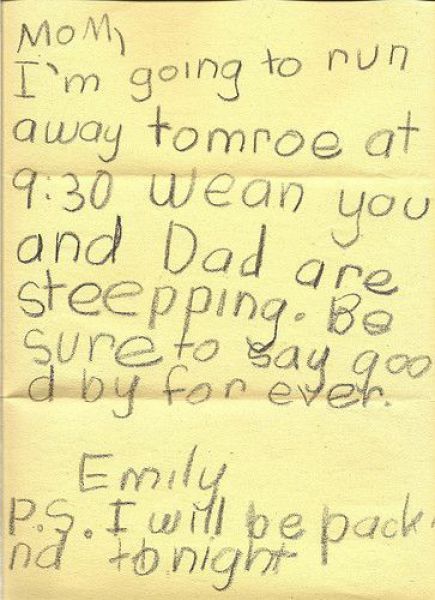 reaking stereotypes! The world looks at being a mom as a duty, not a loving choice. If the woman decides one day to get up pack a bag and just leave, the world would label her as a bad mom.

If a man decides to pick up and leave, the world might think, “Maybe the wife was mean, or to much to handle. Poor guy, he just needed a break.”

If the kid runs away, they are looked at as a troubled teen, attention-seeking or just plain “bad.”

How fair it this crap?

Just My Two Cents! Now, let me hear your feelings on this one in the comments section, below!

“I was warned about mothers’ guilt while expecting my first child…I became a mother…I became much more acquainted with mothers’ guilt. It became a constant companion until one day I realized that I didn’t have children in order to spend my life feeling forever inadequate.” -Margie Warell, Forbes Magazine  END_OF_DOCUMENT_TOKEN_TO_BE_REPLACED

Everyone’s talking about this woman who recently wrote a letter to the woman who married her ex-husband (and stepped into the role of “stepmother” to her child. END_OF_DOCUMENT_TOKEN_TO_BE_REPLACED